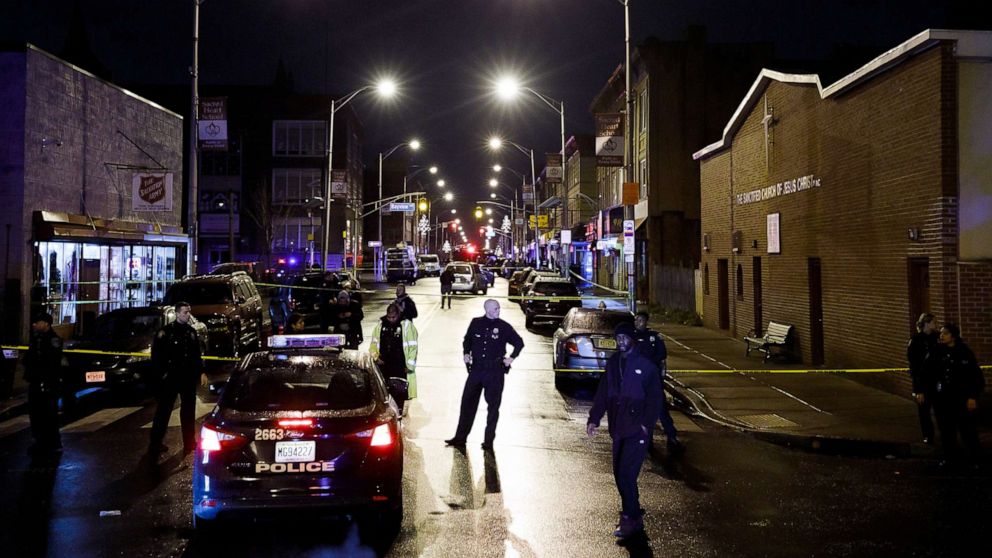 Security video confirms a police shootout in Jersey City, New Jersey, with a pair of rifle-wielding suspects that left a detective and three victims dead began with a deliberate attack on a Jewish deli, authorities said on Wednesday.

Police declined to reveal the names of the three victims killed inside the deli. But Rabbi David Niederman, president of the United Jewish Organizations of Williamsburg and North Brooklyn, a Satmar Hasidic group, said two of the victims killed in the deli were Orthodox Jewish and identified them as 24-year-old Moshe Deutsch and 33-year-old Mindel Ferencz.

Jersey City Mayor Steven Fulop and James Shea, the city’s director of public safety, said the security footage “clearly” shows the perpetrators, who were killed by police after an hours-long gunfight, were out to kill people inside the Jewish kosher market and delicatessen.

But Fulop and Shea declined to describe the attack as a hate crime, saying finding out the motive will be the focus of an investigation conducted by the state attorney general.

“After reviewing the CCTV cameras on the Jersey City side, we do feel it was a targeted attack on the Jewish kosher deli across the street here,” Fulop said on Wednesday morning, standing in front of the attacked establishment. “We could see the [suspects’] van moving through the Jersey City streets slowly, the perpetrators stopped in front of there, calmly open the door with two long rifles, him and the other perpetrator, and began firing from the street into the facility.”

Shea said the footage shows the gunmen exit the stolen van and immediately enter the deli with guns blazing. He said three citizens inside the business were killed and many more could have lost their lives had officers not responded quickly.

“With the amount of ammunition they had, we have to assume they would have continued attacking human beings if we hadn’t been there,” Shea said.

Two foot-patrol officers were about a block from the deli, he said, and responded as soon as they heard the gunfire. They “heroically placed themselves in the line of fire attempting to give the information and both of them received gunshot wounds,” Shea said.

Information available Tuesday indicated the incident was first linked to suspects shooting a police officer at a cemetery before the market shooting began. However, neither Shea nor Fulop would comment Wednesday on reports the cemetery incident was connected to the deli shooting, although Jersey City Police Chief Michael Kelly had told reporters at a news conference Tuesday night that Det. Joseph Seals was killed at the cemetery, allegedly by the suspects.

“Having had an opportunity to go through the video overnight, we now know this did not begin with gunfire between police officers and the perpetrators and then move to the store. It began with an attack on civilians in the store,” Shea said Wednesday.

The shooting broke out at 4:15 p.m. when the streets of downtown Jersey City were packed with people and nearby schools were still full of students, who were placed on lockdown, according to Shea.

“There were multiple other people on the streets so there were many other targets available to them that they bypassed to attack that place,” Shea said. He went on to add, “That was their target and they intended to harm people inside there.”

Shea said within seconds, more Jersey City police officers responded, pulled their two wounded colleagues out of the line of fire and continued to engage the armed suspects inside the store.

Both suspects, whose names have not been released, were killed in the shootout, police said.

The detective killed was identified by police officials as Seals, 40, a veteran of the Jersey City Police Department. He was in plain clothes when he was shot, Kelly said.

Two other officers were shot and wounded, and a third was hurt by shrapnel, officials said. The officers were all treated at a hospital and released.

Seals was the department’s “leading police officer for removing guns from the street,” Kelly said, adding that he was responsible for removing “dozens and dozens” of firearms.

Seals is survived by a wife and five children, Mayor Fulop told reporters. He had been with the department since 2006 and was promoted to detective in the last few years.